One of Félix Guattari and Gilles Deleuze’s lesser-known contributions to political theory is the distinction-collapsing notion of the war-machine. Free of the forms of “overcoding” and “machinic enslavement” associated with internal, isolated nation-state relations, war-machines are organizations (which may or may not be subsumed by the state) which engage in ritualistic, non-lethal warfare for the purpose of a non-paradigmatic, non-hierarchical method of social control, free of the semiotic hegemony of the state. I’ve heard the language of the war-machine used in describing the Phoenix DIY music scene, but that’s never how I’ve seen it. Phoenix is cliquey, but the cliques serve a syndicalist role, as subsets of the whole work together to make it fun for the rest. It’s not unusual to see people with wholly different creative interests coming together and making friends with one another at an event. This is, for the most part, why the Phoenix scene is so good.

Admittedly, the Society of Musical Esotericism, an organization affiliated with local label Ascetic House and responsible for the hugely popular, LA-bound club night Threshold, corresponds closely to the archetype of a shadowy, combative clan. It’s hard to find a point of access into what they’re about, so I decided to take the smoke and mirrors at face-value. What better way to understand a clan with an identity built around appearance than to closely interrogate that appearance? So, without further ado, a conversation with Collin Fletcher and J.S. Aurelius about their visual work for SoME and beyond, including flyers and other promotional materials. TourKidd has also selected some of our favorite SoME- and Ascetic House-related print work to offer a glimpse into the interesting visual culture the collective has built within its microcosm of experimental music. WN: That’s your blood on the Pharmakon flyer, right?

CF: Yeah. The studio janitor wouldn’t let me use his. DIY.

WN: Is it important to you that your design work can’t be replicated? That it’s sort of accidental?

CF: It’s certainly important to its look, sure. But I’d think experimentation leads to replication. The fact that it’s an accident for me doesn’t make it an accident for others. And all my accidents come from doing a bad job at copying someone else. It’s cyclical.

WN: I’ve heard people complain about the legibility of some of your flyers. Is that something you intentionally avoid? Should the reader have to work for it?

CF: Ah, I hope they’re on Facebook! I mean, show flyers nowadays are just fillers for the Facebook event photo anyway. So I’d rather it look cool before it’s functional. But I do like the idea that if it’s attention-grabbing, putting effort into reading it will make you more aware of the information being communicated. Probably not a real thing, but that’s my excuse. WN: Yeah, I feel you. That’s why I’m doing this interview on Facebook chat – everything is in front of me textually, I don’t have to interface with it in a different form and discern its meaning. Could SoME exist without the internet?

WN: Cool. Did you do both Lust for Youth flyers?

CF: I did the gross one (or two), [co-founder] Jes [Aurelius] did the pretty one. He’ll have screen prints of his at the show. WN: Neither is gross, but both use Helvetica, which you also used on some recent promo art for Injury Reserve. Do you like that typeface because it’s a “good typeface,” or because of the huge role it plays in western visual culture as a “good typeface?”

CF: Helvetica is the international typeface, as is Lust for Youth the international pop sensation. Jes actually used Arial, which makes his the more punk rock flyer. But I generally set in Helvetica because no typeface looks more like absolutely nothing. Makes it easier to tell it what to look with context rather than have it lock you into a certain aesthetic. 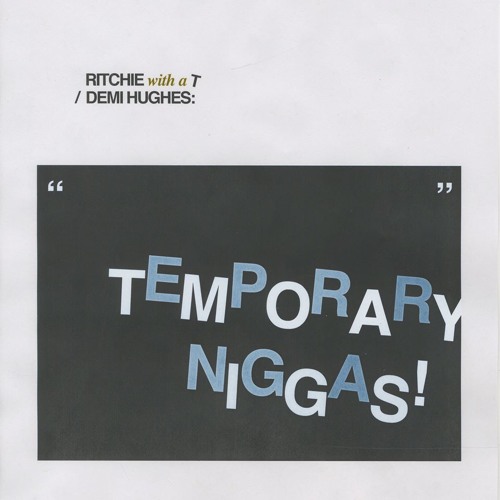 WN: Last question: if you could design a flyer for any lineup, what would it be? WN: What design principles govern work for Destruction Unit as well as, say, Antwon? In which ways does context affect your process?

JA: I wouldn’t say I have any design principles. I try and make use of any and all resources that seem appropriate or beneficial for whatever I happen to be working on at the time. All of my visual or graphic design sense has been self-learned over years of trial and error. There are plenty of things I’ve done that I could look back on and cringe but the only way to understand how visual aesthetics work for you is to just explore. I don’t think there is such thing as “good design” or “bad design;” there is, however, honest design and dishonest design. In my opinion, honest design will always work. As for context, it does hugely influence work – how could it not? Even if you don’t understand the context within which you’re working at the time, you can’t escape it. Whether it’s conscious or not, I try to channel my work honestly through the elements like context, reference, utility and intention to arrive somewhere more powerful than just a visually pleasing piece. WN: That’s an interesting answer. I feel like some read your design as purely referential, and in that sense, not entirely honest or adaptable. Do you think there’s a quality of simulation to your musical moment that you’re capturing honestly through design?

JA: You’re free to read into it any way you please. I have no intention of elevating my own ego through any of this, so in that sense, if you think it’s garbage or unoriginal or unadaptable or dishonest, I might even agree with you. I’m not an artist, I’m not a musician, I’m not a writer. These things, to me, are just a few of many tools that are sometimes appropriate in the strive to elevate the collective human consciousness. But regarding them with respect gets us nowhere. WN: The flyer for the Milk Music show at Jewels Catch One on March 1 might be my favorite thing you’ve done – I think the quality it shares with the rest of your best stuff is really great typography. I’d imagine that was hand-set? Describe the process there.

JA: The majority of my lettering is handset then redrawn. Usually I find a few letters somewhere that I like, be it in a book or magazine, then just imagine how the other letters I need would work. I usually hand draw all of it. It always just feels more personal, even when you can’t consciously tell you’re looking at hand drawn letters. I have no formal understand of how typography or type design is suppose to work so often times I’m just guessing.

WN: Good eye. I also really like the type on the Threshold fliers. I’m also generally interested in the aesthetic of Threshold, your “night for maladjusted youth” – are there any particular club nights that inspired what you’ve created with that, or is that a new vision?

JA: Yes, there are plenty of club nights that have inspired what we try and do with Threshold, in so far as it’s a reaction against all of them. Our night is very concerned with being all inclusive and non-elitist. There is no door policy, we try to keep it affordable, and we try to keep a good balance of the experimental and the danceable. A lot of the people we invite to perform wouldn’t be welcome at other techno clubs. We try and specifically book people who otherwise would not get booked in LA, or people who maybe aren’t yet big enough names to have their own draw, but that we know will really blow people’s minds. Most of the lineups are friends of ours we want to see and we want others to see. It’s not about having a strict door policy, long queues outside, superstar DJs, strict BPMs, intimidating security guards, bottle service, or any of that. It’s about encouraging people to explore outside of their familiarity. Whether it’s a crew in jean vests with Casualties back patches dancing to Container, or rave kids sitting through a Chainfight set, we just want to facilitate that step outside the comfort zone, because often that’s where real progress is made. Everyone is welcome and everyone has a good time. JA: There are 100 different ways to answer this question, and I think the task of elevating the human condition is something that stands outside of time or deadlines. But if I am to consider the question realistically, as it was asked, I just hope to encourage people to do more than simply endure their realities but rather to create and live in them. What folks are saying...

Welcome to the TourKidd Blog.